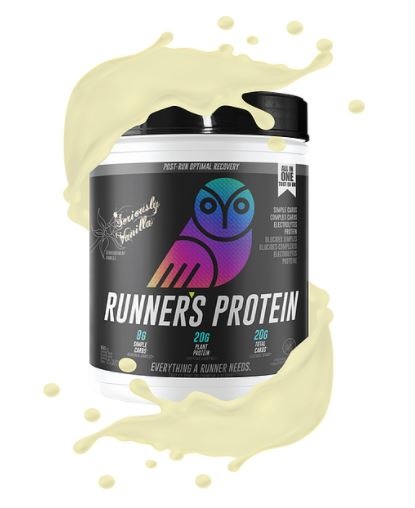 Runner's Protein is runner formulated to the exact post-run requirements of all runners using the highest quality and minimal ingredients.

Slow carbs provide the steady and sustained energy and nutrients your system craves while helping protein repair your muscles. The timing of your carbohydrate intake is vital, due to the role of enzymes in the body. Evidence from numerous studies is overwhelming in favour of consuming a rich carbohydrate drink soon after a run. If insufficient carbohydrate is consumed and the timing is wrong, performance can be severely compromised in subsequent runs often leaving runners confused as to why they feel so tired.

Runner’s Protein has 20g of 3 plant based proteins, making it a complete protein.  Every runner knows they need carbs, but protein is just as important to muscle recovery after a run. It repairs muscle damage, diminishes the effects of cortisol, and when taken with carbohydrates, speeds your body's ability to replenish its glycogen stores, your all-important energy source for those awesome runs. If you've ever "hit the wall" during a run, you know what it feels like to deplete your glycogen reserves.

Electrically charged minerals in each serving! Runner’s Protein All In One contains 403mg of electrolytes per serving that is sure to help replace the electrolytes you lost during your run. Essential electrolytes are lost in sweat when running, including potassium and sodium. This deficiency will not only contribute to muscle cramps but can also ruin your performance on your next run. For a runner, keeping your electrolytes balanced is key for successful training and optimum performance. Make your next run better